Are you looking for a clever way to close out the school year for your little group of elementary students?  Are you on a tight budget, or have very few amusement options available in your town.  NO WORRIES.  Us too!!!  Hopefully your town at least has a city park that’s kept nice, mowed and watered, or a nice, large, grassy area with lots of shade trees?  That’s all that’s needed for this shindig.

There goes the school year!!!!

I was thinking it would be fun to do some olympic type games that gave a nod to things the kids could toss out of their lives for the next few months… like pitching their alarm clocks, tossing their lunchboxes (aren’t gonna need those for a while), and flinging their crayons at a new target –  grass, lazy days, and sunshine, because they’ve leaped over their studies, and run their water bottle relays with rewarded success!

I sketched out my party plan in a notebook… 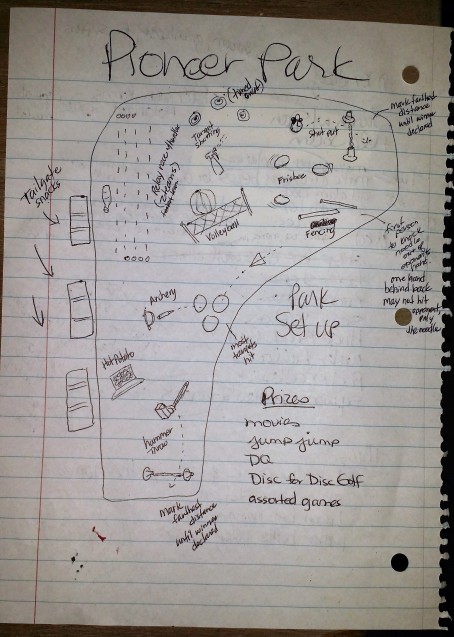 …and then went to work making the signs for the games: 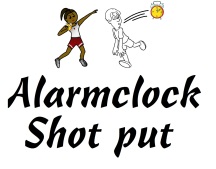 ….and TORCHES for each of the kids to wear (as medals)…

I printed out sheets of the torches, wrote the kids’ names on them, had them laminated, and then punched a hole at the top to string a ribbon through.  On the back I printed the list of events so I could mark winners with a red sharpie, or completed with a blue sharpie. 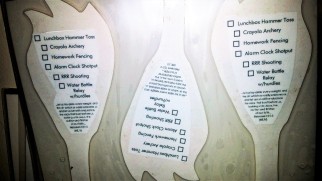 The kids began their afternoon of fun by first having lunch delivered to them at the school (from Wendy’s, courtesy of one of the awesome parents), and after each of them had used the bathroom, they “began carrying their torches” on their little journey from the school to the park (about a 3 block walk with their teacher).  When they arrived at the entrance to the park, this is the first thing they saw:

They presented their TORCHES, and then positioned behind the sign to pose for pictures.  We were blessed that a very talented member of the school staff, also teacher, also photographer, and also composer of the school’s yearbook, was there to take some wonderful pictures, which she made into a full two pages of the yearbook.  And one day I will scan and post them here, if she gives me permission.

The first game in our line up was the…

(The kids aren’t gonna need a lunchbox for a few months.  Hip hip hooray, let’s toss it away!)

First I demonstrated to the kids what they would be doing in this game.  I grabbed the lunchbox by the handles, put my left arm straight out, twirled in a counter-clockwise circle a couple of times, and then when I was facing the field, let go of the lunchbox and let it fly as far away as it would go.  After the demo I handed the first kid the lunchbox and let them try.  The kids lined up behind the starting line and took turns twirling and tossing the soft-sided lunchbox out into the field.  (P.S. I had placed a small bag of pinto beans inside to give it some weight).  The child with the farthest distance after three tosses was declared the winner!

Supplies needed: Sign, lunchbox, a couple of orange cones, a jump rope, and something to mark the farthest distance. 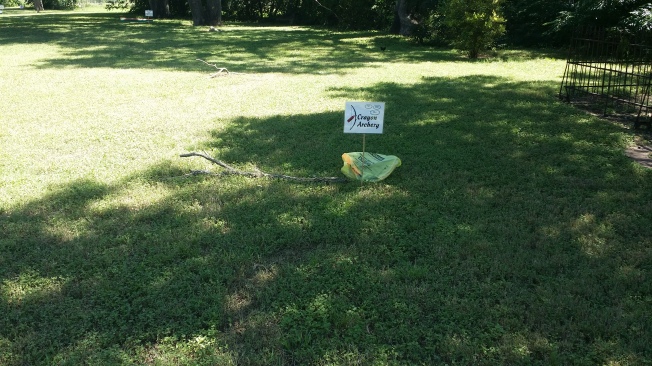 After I attempted to demonstrate this game, we decided to turn it into a Crayola Javelin Throw, since our cheapo “dollar store” bow kept breaking.  The darn string kept popping out of its slot (Update: wind a rubber band tightly around the tip ends of the bow to keep the string in place. This works like a charm).  Anyway, after a bit of frustration from the darn bow popping apart every time we used it, we just decided to throw the crayon like a javelin.  The kids each got a turn to stand behind the line (I used a downed limb from one of the trees as the marker for this) and then take a turn hurling their javelins at the three hula hoop targets laid out in the distance.  (You can barely see them in the photo below, but look close.)

This is what the arrows/javelins looked like up close.  I used fat crayons and inserted them into big straws (the ones used for smoothies).  They were a perfect fit, and stayed snuggly attached to each other for the whole event.  At least something stayed to together!

The student with the most targets bullseyed after three tries was declared the winner!

Supplies needed: One dollar-store bow and arrow set, 1 pkg big crayons, the sign to identify the event, and three hula hoops.  Oh, and something to mark the starting line.

You are looking at the fencing arena.  Ours was marked by 4 trees as boundaries.  After demonstrating to the students what they would be doing, the students lined up behind the sign and two pairs at a time faced off using the pool noodles as their fencing swords.  (I got the fatest noodles I could find, to make it harder for little hands to hold onto).  With one arm behind their backs they each swung their noodles at their opponent’s noodle, trying to knock it out of their hands, because homework is now out of their hands.  Any body contact or face contact, or stepping outside the boundaries was considered a scratch and the offender was disqualified.  Winners of each duo were collected to the side to compete in round two.  Eventually a final winner was declared. 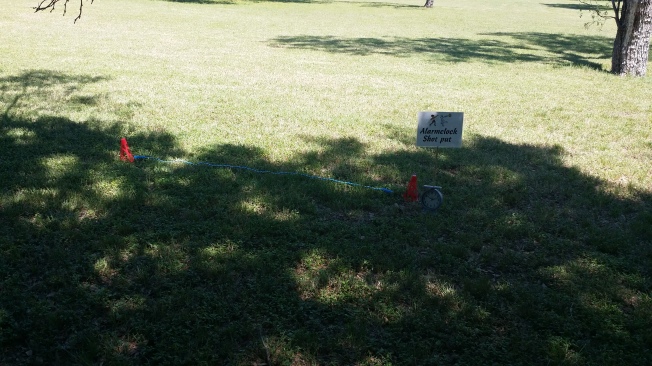 (Hey kids, say goodbye to the alarm clock for a few months!!!!  In fact, let’s pitch that obnoxious contraption as far as we can throw it!)

First I demonstrated to the students how this game was played, similar to the hammer throw, and then the students were lined up behind the starting line, and took turns holding the alarm clock under their chins, twirling, and then heaving it as far as they could out into the field.  (Note: I used a cheapy plastic clock from the dollar store.  It broke on the first throw and left kind of a sharp edge that I cautioned the kids to be careful with.  Then the glass also broke.  Fail!  The better choice would have been something made 100% out of non shatterable plastic and no glass).

The child who launched it the farthest distance after all of them had been given three tries was declared the winner.

Supplies needed: Sign, cones and jump rope to mark the starting line, an alarm clock, and something to mark distance. 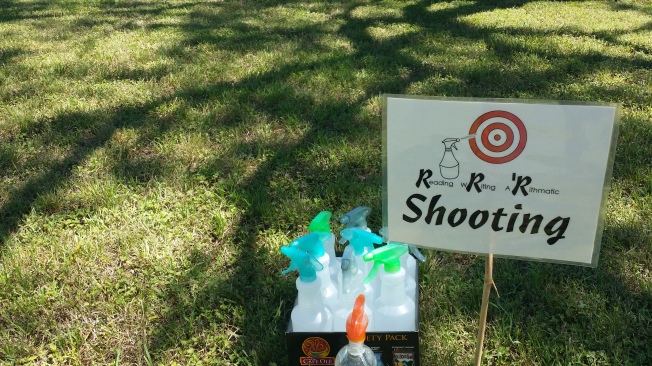 Supplies needed:  A sign, three targets, and a squirty bottle filled with water.

(Hey kids, you’re not gonna need those water bottles for a while, AND we can celebrate that you all got over your hurdles of – Language, Art/Music/P.E., and Science this year.  Way to go kids!  You are all champions!!!!)

The kids lined up in two groups behind the starting line.  After demonstrating to the kids how to run the course, I handed each first person in line a water bottle. At the sound of my whistle the two kids with water bottles ran down the course, leaping over the hurdles and down around the cone at the far end of the course, and returning to hand off their water bottle to their next teammate.  The first team to complete the course was declared the winner.

This concluded the structured games.  At this point the kids were given a break to get a drink and snack and rest for a bit. Several of the parents brought coolers full of drinks (bottled water, juice, Gatorade, etc.) and snacks (Cuties oranges, goGurts, popsicles, cookies, carrots, etc.) for the kids to  munch on and stay hydrated with, and they served their treats “Tailgate style” out of the back of their vehicles, parked alongside the park.

For the remainder of the afternoon  the kids participated in free play.  I had set up a Badminton net and blew up a giant beach ball for them to either toss over the net to each other volleyball style, or just kick around the park in a giant game of “keep away.” 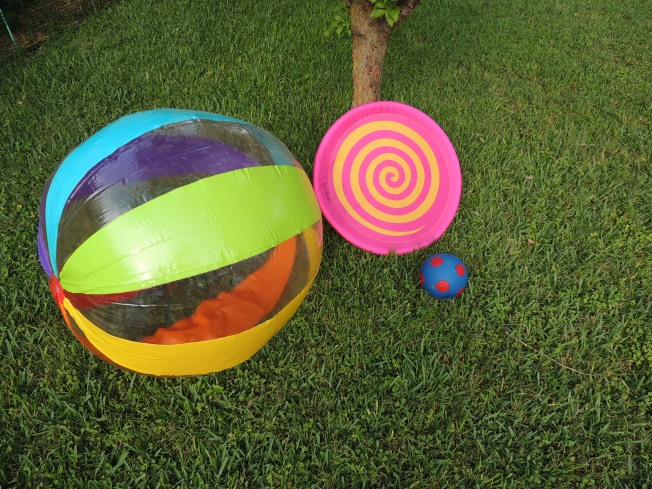 In addition I brought a giant soft-sided Frisbee, bottles of bubbles for everyone, a soccer ball, the hula hoops, and gave each child a squirty bottle full of water to also play with.  In addition, one of our awesome parents brought a huge cooler full of water balloons for a hot potato game.

The parents and I chilled out on blankets spread-out under the shade of a grand old oak tree, and visited with each other while the kids tear-butted around having the time of their lives.  I think the kids all had as much fun, if not more, with free play as they did with the games, hey, but a theme is a theme, right?  What a great afternoon and terrific group of kiddos!!!!  I hardly noticed that it was 95 degrees and 50% humidity.  HA!

After a couple of hours of playtime, the parents went around and gathered up the signs and parts of each game and helped pack everything up.  The kids picked up all the trash and bits of broken balloons and then gathered with their teacher to walk back to school.  Before they dismissed to go home each was presented a gift bag, which contained a movie theater pass (that they could use to go see Diary of a Wimpy Kid 2, which just released in theaters the week before), a pass to the local indoor inflatables park, and a gift certificate to Dairy Queen, plus a Nerf ball (which gave me the inspiration for the theme of the bags), so they could all… “Have a BALL this Summer!”  🙂

Yay kids…you finished your race well!  Happy summer to you all!!!!!

“Therefore we also, since we are surrounded by so great a cloud of witnesses, let us lay aside every weight, and the sin which so easily ensnares us, and let us run with endurance the race that is set before us, looking unto Jesus, the author and finisher of our faith, who for the joy that was set before Him endured the cross, despising the shame, and has sat down at the right hand of the throne of God.”   Hebrews 12:1-2  NKJV

Hello, and welcome to my little cul-de-sac on the web. It is a delight to make your acquaintance. Before you read another word, please go grab yourself a beverage and something yummy to nibble on, and then come back, flop down in your comfy chair, and take your time reading the rest. OH MY…what is that little yumminess you have there? I’d love your recipe! Where do I start? I’m a sixty-something (shhhhhhhhh), still-doesn’t-know-what-she-wants-to-be-when-she-grows-up wife, mother, grandmother, sister, daughter, niece, cousin, aunt, stranger, and friend, with a fiendish hankerin’ for spoiling people. I was born and raised in the fly-over country of Wyoming’s Rocky Mountains, which might explain my natural ability to fritter away hours dreaming up stuff to do (‘cause there was nothing to do except what we dreamed up to do). I’ve decided on the senior side of life, that my favorite things are cooking up something new in the kitchen, crafting something homemade for my walls, excavating treasures from the living words of God, tinkering a little bit in my yard and garden, and nurturing relationships with the precious people God has graciously placed in my life. I pray if you have stumbled here by some devine happenstance, that you will find a treasure and that God will get the glory. Please, by all means ransack through all my recent posts and try any of it out that you like. I’m sure it will all look cuter on you anyways. Someday I hope to hear all about it! The Father's great peace and blessings to you friend!